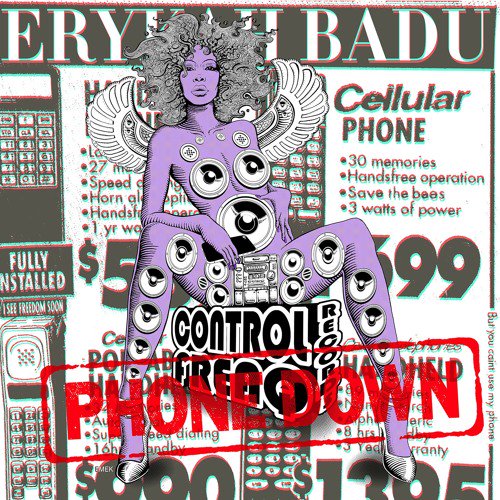 • When Erykah Badu announce she was releasing a mixtape earlier this year, fans sat on the edge of their seats with the highest level of anticipation but in July all she delivered was a playlist. As we are all aware of those two are not the same, but she returned to re-announce the mixtape release which is expected this week and to make true of this potential high-powered EP Ms.Badu released the first single off the tape. “Phone Down“the first track from her upcoming mixtape “But You Cain’t Use My Phone“, is a sonic proclamation of Erykah’s ability to gain your attention, keep your eyes on her and reject the control of technology.

In today’s age, you have to do a lot to draw someone’s attention away from their phone but then again when your Erykah Badu maybe you have to do less, but in this 3 minute track Badu gives you plenty of reason to keep your head up and eyes open. The jazz piano takes lead as the mystic synth and angelic vocal softly play the background. The drum pattern keeps you in pocket and the one of kind nurturing voice that Badu is known for blesses us with seductive lyrics. Her ability to captivate all through her sounds still amazes and as we all know, visually she will stop anyone in their tracks. We at headquarters, are very anxious to see what remixes take place on this record. Maybe Drake will reconstruct the track similar to how Erykah did his HOTLINE BLING.

ENJOY “PHONE DOWN” BY ERYKAH BADU & HER “HOT LINE BLING” REMIX BELOW!